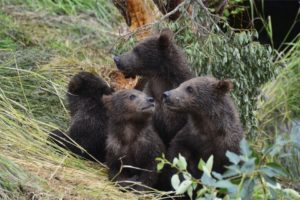 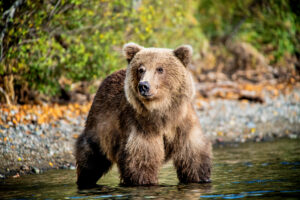 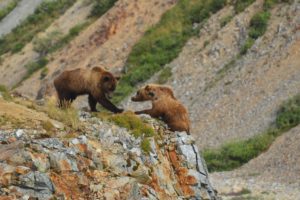 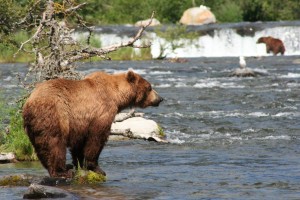 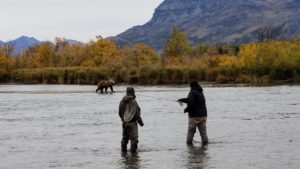 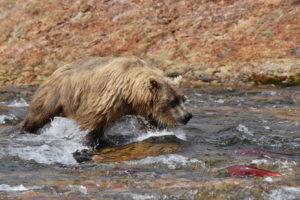 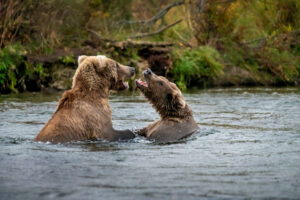 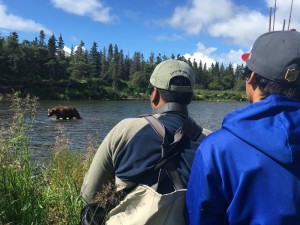 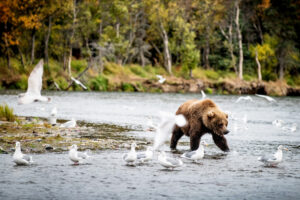 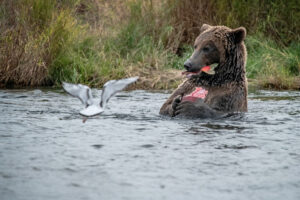 Bears are a dominant and widespread form of wildlife throughout all of Alaska and bear sightings are not uncommon in many regions. Alaska is home to 98 percent of the United States’ population of brown bears. Bears of this species that are found inland are commonly referred to as “grizzlies”, but “brown bear” differentiates those which live in coastal areas where their primary food source is salmon.

Brown bears are wide-ranging animals, meaning they can live across a variety of different environments in their lifetime. Populations of brown bears vary depending on the availability of food, which is why Alaskan brown bears are more commonly found along the coast. Brown bears are omnivorous, though their habitats typically mirror the behavior of salmon. After emerging from hibernation in their dens during the early spring, brown bears move towards streams to follow the predictable runs of salmon. This migratory pattern usually occurs from June to October, when brown bears can be found hunting for salmon along the streams.

No See Um Lodge’s location on the Kvichak River provides for occasional bear sightings but a typical day out in the field will generally include multiple bear sightings and often an entire day spent fishing with the bears. The waters here are teeming with fish and our guests aren’t the only ones looking for good sport! Bears are common in the areas surrounding the waters and whether you’re on a fishing trip, strolling the grounds, or even taking in the view from your window, sooner or later you’ll see one of these beautiful creatures.

Whether you are watching bears while fishing or part of a guided viewing, there are certain precautions you must be mindful of. If you’re part of a tour, your guide will have a list of safety measures and steps to go over with you. Here are some quick helpful things to keep in mind when looking for bears:

Remember, bears are very common in Alaska and you’re likely to happen across one even if you don’t intend to. This shouldn’t be a cause for concern: bears typically keep to themselves unless they feel threatened and they’re almost as used to us as we are of them. Still, you should always be prepared and it’s important to act appropriately. Everyone visiting Alaska should at least be familiar with some of the standard protocol for encountering a bear. Our fishing guides are highly experienced in dealing with bears and will ensure your encounter is exciting, informative but not dangerous.

Bear Watching
Wednesday, May 18, 2016
★★★★★
“ There are so many river options to fish daily, it a new adventure everyday. Be sure to take a day just to take pictures of the wild life, rivers, trundra, and Bears.”
- Jeff W

Bear Watching
Thursday, May 19, 2016
★★★★★
“ The rivers were full of fine fish to catch and bears to watch, and the food back at the lodge was terrific as well. Bristol Bay is simply a superb place, and this lodge provided a wonderful way to see a good number of the streams.”
- Thomas Q
5
Sending