Early October I returned home from the lodge and over four months of flying and guiding. I was home five days before getting on a plane for a long ride to Dubai for a day of fishing for queenfish with my son Jack and Mark W.  Ocean Active

operates a very well run fishing operation right in Dubai, very convenient for the traveler passing through or businessman with a half-day to kill. We met our guides at the pier about 7am and boarded a 32′ open fiberglass boat followed by a short ride no more than a mile off-shore. Our guide was searching for birds and quickly located a flock working bait. We got within 75 yards where we could see the queenfish savaging the bait, it looked like a large number of fish and also very fast moving.

The guide used a spinning rod to launch a teaser into the school then ripped it back as fast as humanly possible. The teaser was viscous attacked several times before retreating into our 10wt casting range where we were ready with several varieties of bait fish patterns. A long, fast strip resulted in a very solid grab, if only our trout fishermen brain could remember to NOT LIFT the rod, followed by a blistering run with multiple jumps and a very impressive fight. In our half day of fishing we probably had a dozen queenfish on, landed five or six as well as a few kingfish. Ocean Active has several locations and fishing options within driving of Dubai and I’m excited for my return and next adventure with them.

That evening Jack and I made our way to the Mall of the Emirates where we did some downhill skiing on the only indoor ski mountain in the middle east. It wasn’t Tahoe, or even Alyeska, but with two tow pulls and a real chair lift it was worth the effort and even the cold hands before venturing back out into the hot evening air for a couple of miles walking back to our hotel. 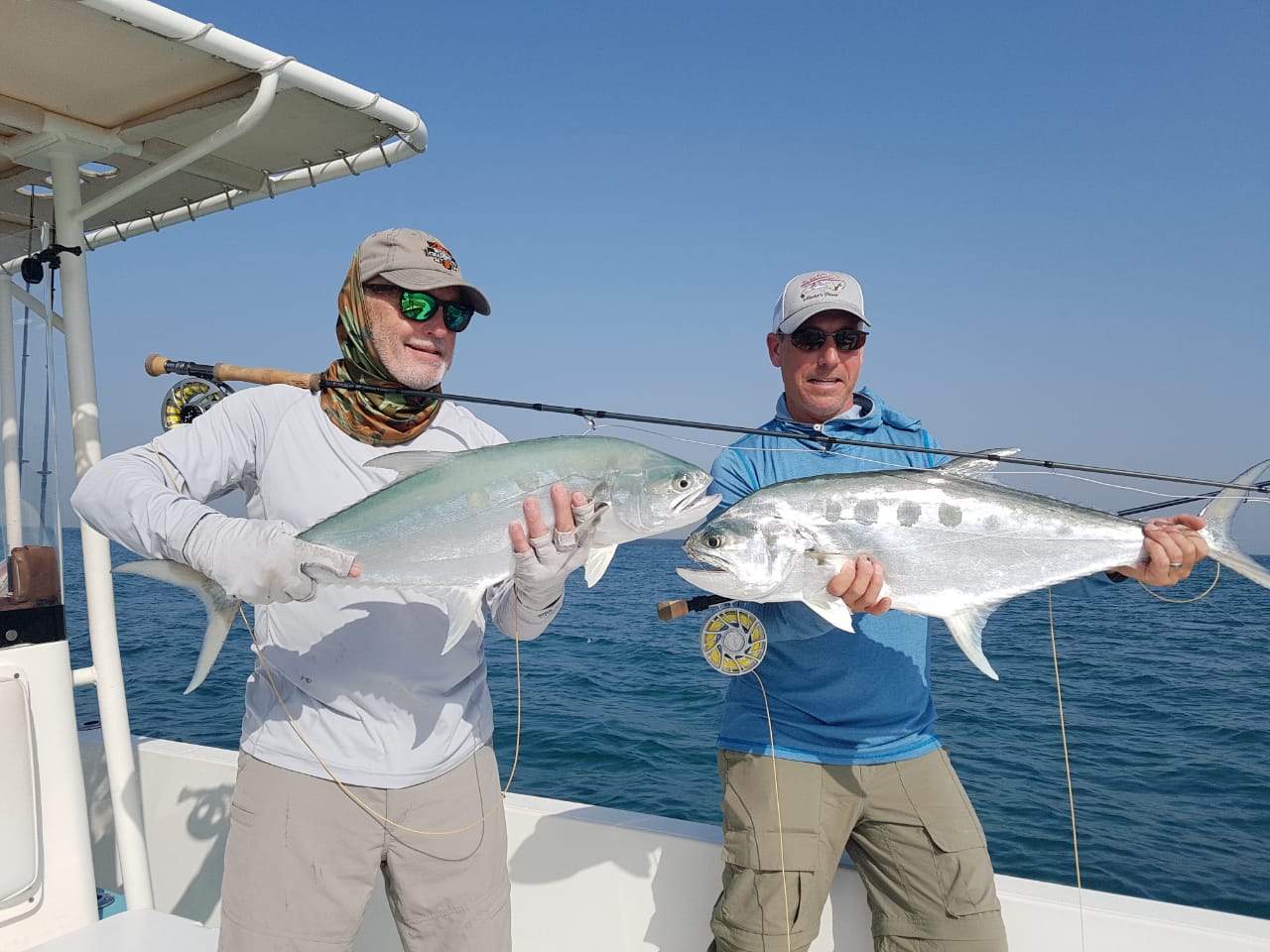 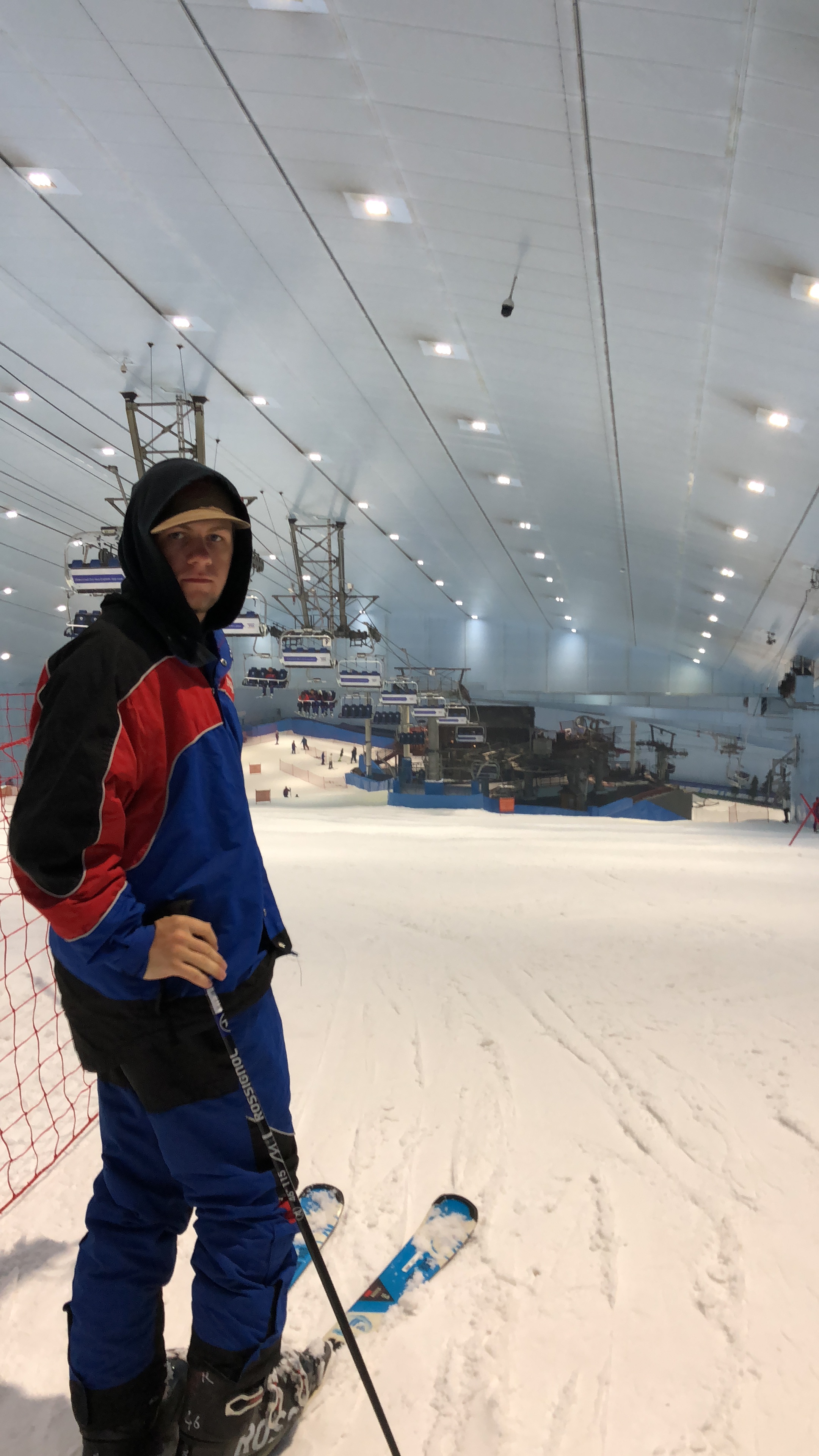 The next day we boarded our flight to Mahe’, Seychelles where we met with the rest of our group for dinner and drinks. Mahe’ is the largest island of the Seychelles located about 1000 miles east of Africa in the Indian Ocean. This is the last big airport before boarding a chartered flight to Alphonse Island, about 250 miles to the south. Alphonse atoll is tiny, total island area is only .66 of a mile. The lodge is really the only thing on the island and all guests get around on bicycles. It’s your typical tropical paradise with lush, green jungles, white sand beaches and nothing else. The island has a resident population of giant tortoise, the largest we encountered was at least 600lbs and named George.

Each guest is assigned a private ocean bungalow with outside shower, air conditioning and bicycle. Breakfast is at 6:30, after breakfast anglers loaded lunches and whatever gear they had into the basket on their bike for a five minute ride to the fishing center. Next is a 45 minute catamaran ride out to St. Francois Island where flats boats are anchored, splitting off with your assigned guide and exploring miles of incredible flats. Our first day out proved to be very rough weather- wind and heavy showers reduced visibility to yards while making casting very challenging. Even in these conditions Jack and I landed several bonefish and one small Giant Trevally, or GT.

A typical fishing day goes until 4pm before meeting back at the catamaran for the trip back to Alphonse but that day was cut short due to conditions. The next five days were a repeat without the rough weather and many hours of exciting fishing. Anyone that has hooked a GT on a fly can verify that it’s very exciting. We didn’t hook many, several were hooked and lost but a few people were lucky enough to experience the line burning, rod breaking, explosion that is a GT leaving with a fly in its mouth. I was lucky enough to hook four and land two. One of my unsuccessful hookups ended with my line wrapped and me completely underwater trying to untangle the mess.

Aside from GT and bonefish we caught triggerfish, sailfish, wahoo, barracuda, snapper, grouper and a few others I can’t recall names of. We had a few shots at permit and milkfish though none were landed during the week. I believe one permit and one milkfish were hooked. The food was excellent and abundant, guides very knowledgeable and professional, accommodations extremely comfortable, overall a very well run operation.

A week after arriving on Alphonse we were back in Mahe and boarding a flight to Nairobi, Kenya. We spent one night in Nairobi followed by another flight to Lusaka, Zambia. A quick transfer to a small twin engine plane and 30 minutes later we were on the ground at the Royal airstrip just outside the Lower Zambezi National Park. We were met with Land Cruisers and driven 15 minutes to the Zambezi river and loaded into a boat for a 20 minute ride down to Chiawa Camp.

Located on the edge of the river, Chiawa is a very comfortable tent camp. “Tent” isn’t really a good description of the accommodations. While they were technically canvas structures, they had indoor and outdoor showers, full time power, very comfortable beds and even WiFi. Each guest tent faced the river, a few offered excellent wildlife viewing from the covered porch and all included a variety of nighttime animal noises. It turns out that hippos are very loud, at times it sounded like they were possibly on the porch. We had monkeys and elephants walking through camp and on more than one occasion we heard lions calling in the distance. All these animals potentially right outside your tent created a real hazard so anytime we exited our tent for meals or activities we called via radio for an escort.

The typical day started with a 5:00am wake up, 5:30 breakfast. At 6am we split off to begin our chosen daily activity. Activities included fishing, game drives in a Land Cruiser or boat, an easy guided hike with armed guide or guided canoe trip. All morning activities went until about 11am with brunch served back at the lodge then. After eating everyone retired to their tents for a long nap before 3:30pm tea. Tea was followed by the afternoon activity until “sundowners” at 6pm. Sundowners are cocktails in the field while watching the incredible African sunset surrounded by animals.

The animal viewing was amazing. Everyday we saw elephants, hippos, impala, baboons, monkeys, warthogs and crocodile to name a few. Lions, leopards and hyenas, though not as common, were spotted on several occasions. Kudu, Waterbuck and Bushbuck complemented the thousands of Impalla and troops of baboons everywhere you went. I have to believe it would be hard to find another place with the number and variety of wild animals concentrated as they were here. Poaching destroyed the last rhinoceros decades ago but everything else seemed to be in abundance.

Our primary target species here was the African Tigerfish. Silver and black with very large teeth, they are an aggressive, hard fighting fish that can grow to over 100lbs in certain areas of Africa. Our Tigerfish ranged from 1 to 10 lbs and proved to be very elusive, especially on a fly. The Lower Zambezi river is a wide, fairly dirty river with visibility ranging from inches to a few feet at best. As is the case with most predatory river fish, they spend much of their time hiding behind structure or along edges looking for a passing meal. This means casting your fly into and behind downed trees, root balls and any number of possible hazards. We lost many flies and landed a few fish, the biggest was about 10 lbs, taken by Phillip on the last day. 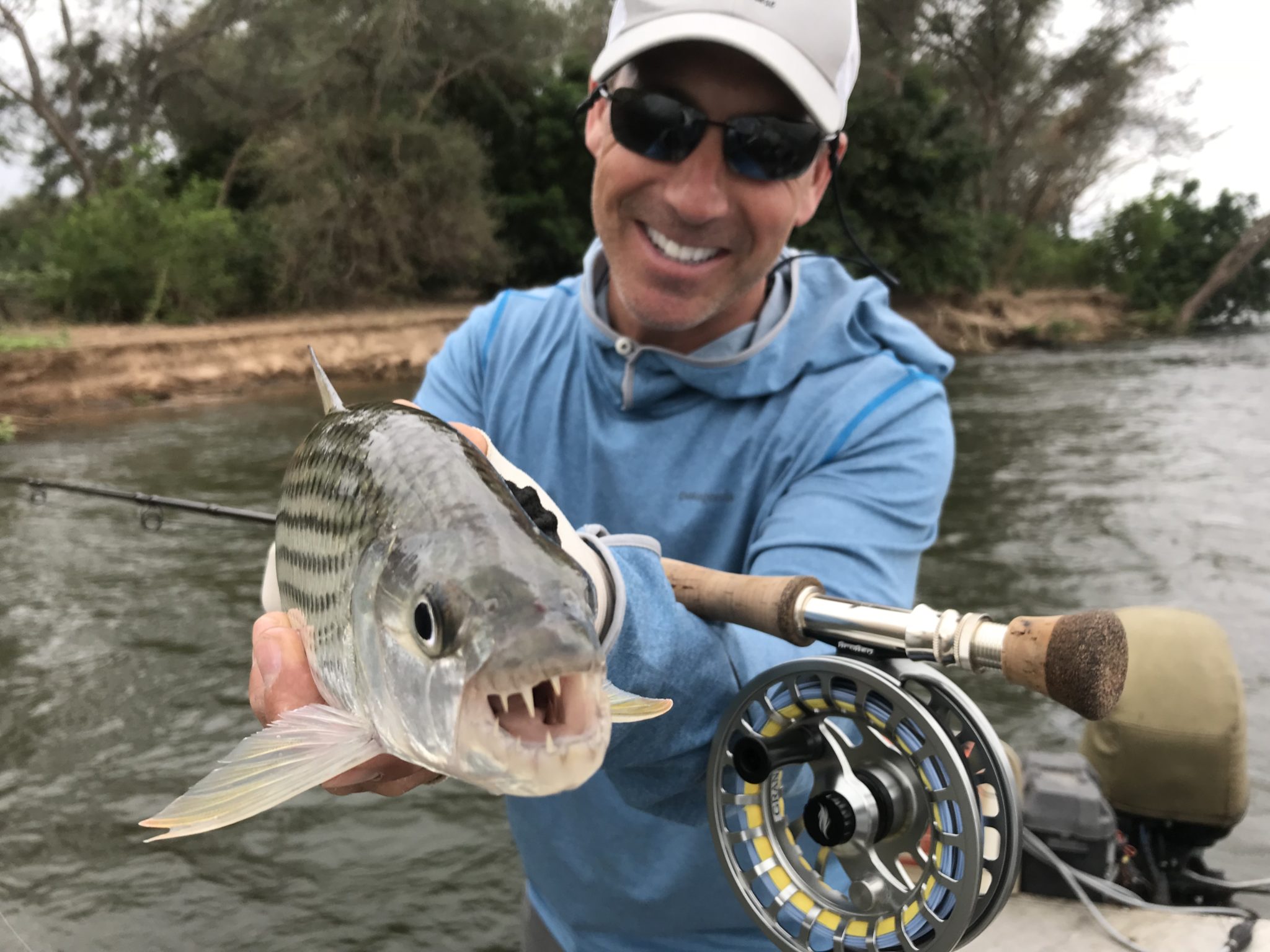 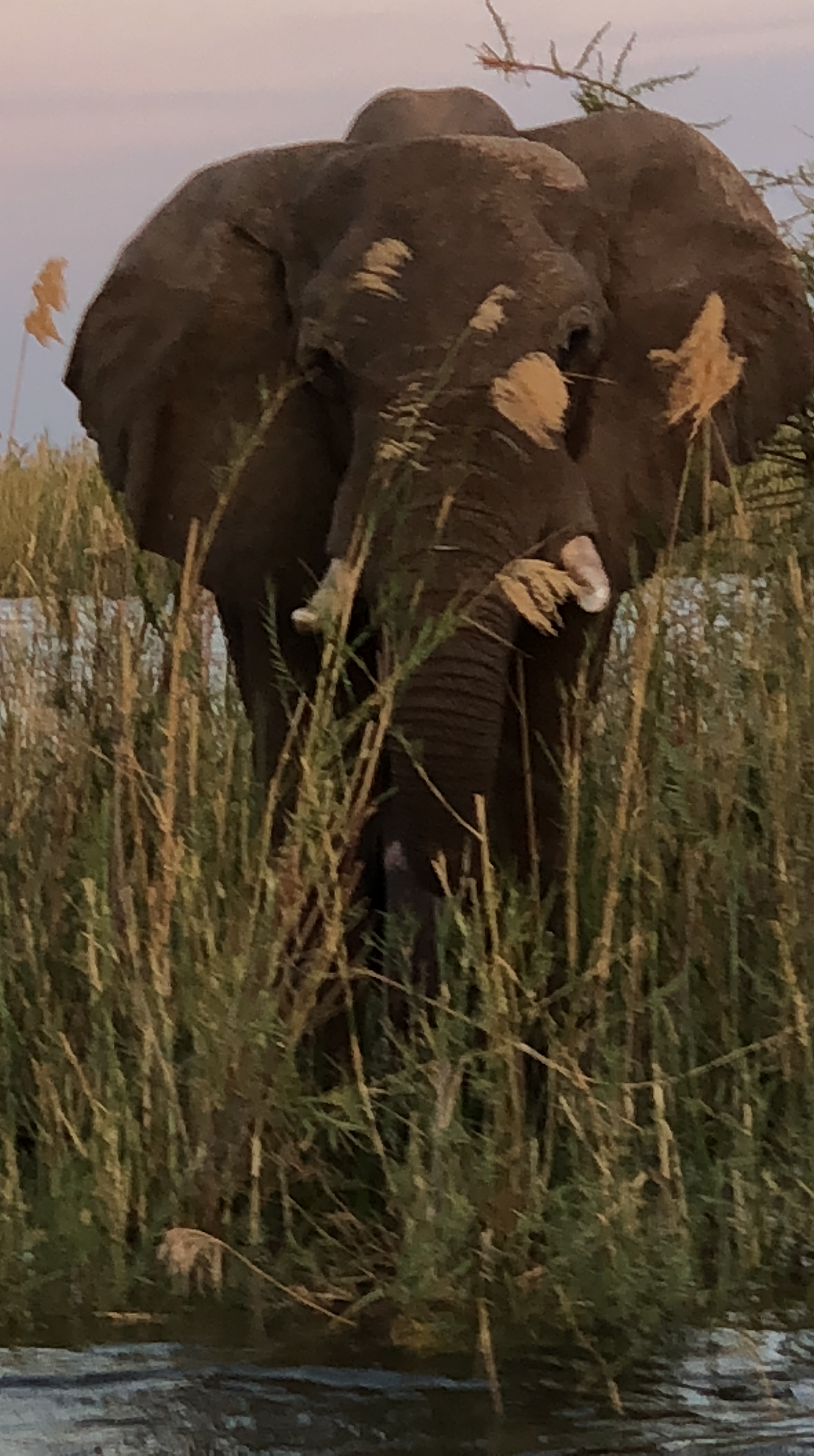 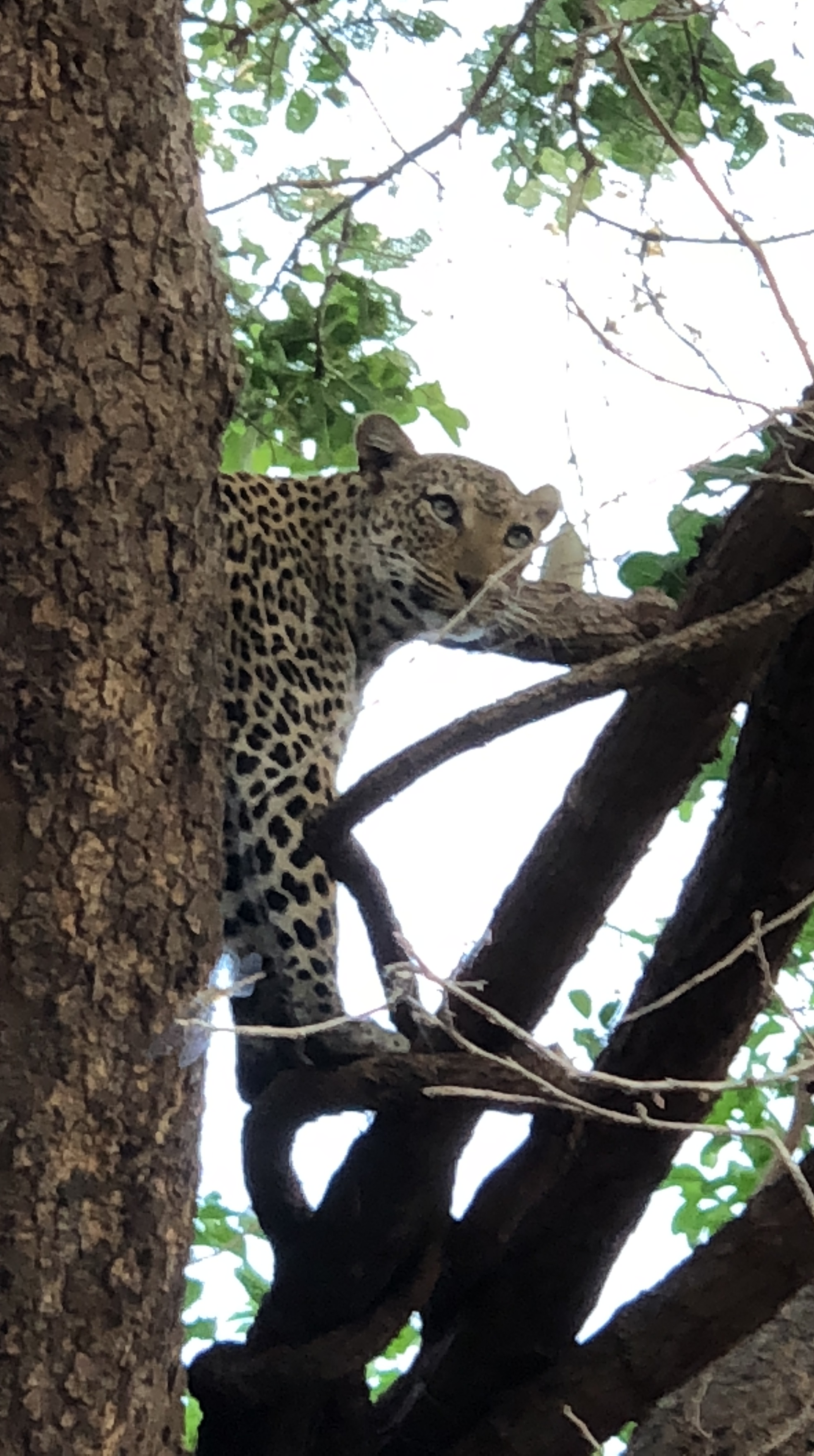 THANKS TO ALL WHO HELPED TO MAKE IT HAPPEN

This was a bucket list trip for many of our group, myself included. Getting to take my son on this adventure made it even better but without the great group of people involved it wouldn’t have been as fun. Everyone got along very well, enjoying each individuals experiences and getting to know each other. There were a few minor bumps along the way but nothing an extra five hours of flying couldn’t fix. Many thanks to the great guides and staff at Ocean Active, Alphonse Fishing Company and Chiawa Camp